All We Can Save: The Power of Stories, with Kendra Pierre-Louis 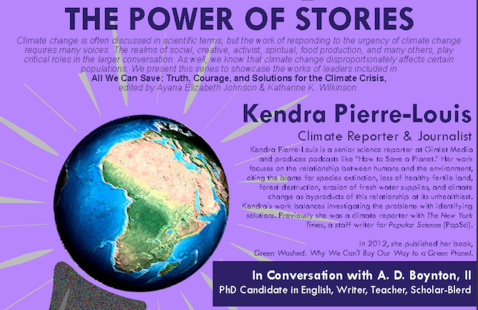 Climate change is often discussed in scientific terms, but the work of responding to the urgency of climate change requires many voices. The realms of social, creative, activist, spiritual, food production, and many others, play critical roles in the larger conversation. As well, we know that climate change disproportionately affects certain populations. We present this series to showcase the works of leaders included in All We Can Save: Truth, Courage, and Solutions for the Climate Crisis, edited by Ayana Elizabeth Johnson & Katharine K. Wilkinson. This series brings thought leaders from diverse professions and callings into conversation with KU students and the community.

Kendra Pierre-Louis is a senior science reporter at Gimlet Media and produces podcasts like “How to Save a Planet.” Her work focuses on the relationship between humans and the environment, citing the blame for species extinction, loss of healthy fertile land, forest destruction, erosion of fresh water supplies, and climate change as byproducts of this relationship at its unhealthiest. Kendra's work balances investigating the problems with identifying solutions. Previously she was a climate reporter with The New York Times, a staff writer for Popular Science (PopSci).

In 2012, she published her book, Green Washed: Why We Can't Buy Our Way to a Green Planet.

Pierre-Louis will give a presentation, after which she will be in conversation with A. D. Boynton, II, PhD Candidate in English, Writer, Teacher, Scholar-Blerd.

Presented by: The Commons; the Environmental Studies Program; the Indigenous Studies Program;  the J. Wayne and Elsie M. Gunn Center for the Study of Science Fiction; and the KU Departments of African and African-American Studies, English, Geography and Atmospheric Science, and Geology; the Emily Taylor Center for Women & Gender Equity; the KU Sawyer Seminar; the Office of Multicultural Affairs; the Health Humanities and Arts Research Collaborative; and the University Honors Program.