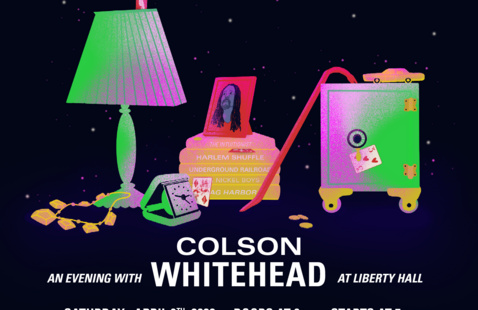 https://www.paperplains.org/events
Add to calendar
Save to Google Calendar Save to iCal Save to Outlook

Paper Plains Literary Festival presents An Evening with Colson Whitehead. This in-person and virtual event is part of the Beach Author Series which was established by the Ross and Marianna Beach Foundation. It is presented in partnership with the Lawrence Public Library, the Lawrence Public Library Friends & Foundation, The Commons at KU, and the Hall Center for the Humanities at the University of Kansas.

All Paper Plains Literary Festival events are free and open to the public.

About the Book: “Ray Carney was only slightly bent when it came to being crooked…” To his customers and neighbors on 125th street, Carney is an upstanding salesman of reasonably priced furniture, making a decent life for himself and his growing family. Few people know he descends from a line of uptown hoods and crooks, and that his façade of normalcy has more than a few cracks in it. Cracks that are getting bigger all the time. Ray’s services as a small-time fence escalate when a heist goes sideways and he finds he has a new clientele, one made up of shady cops, vicious local gangsters, two-bit pornographers, and other assorted Harlem lowlifes. Thus begins the internal tussle between Ray the striver and Ray the crook. As Ray navigates this double life, he begins to see who actually pulls the strings in Harlem. Harlem Shuffle’s ingenious story plays out in a beautifully recreated New York City of the early 1960s. It’s a family saga masquerading as a crime novel, a hilarious morality play, a social novel about race and power, and ultimately a love letter to Harlem.

About the Author:  Colson Whitehead is the #1 New York Times bestselling author of Harlem Shuffle (National Book Critics Circle nominee and a New York Times Notable Book Of The Year), The Nickel Boys (winner of the 2020 Pulitzer Prize for fiction and the National Book Critics Circle award finalist), The Underground Railroad (winner of the National Book Award and Pulitzer Prize), The Noble Hustle, Zone One, Sag Harbor, The Intuitionist, John Henry Days, Apex Hides the Hurt, and one collection of essays, The Colossus of New York. He was named New York’s 11th State Author in 2018.

Colson Whitehead’s reviews, essays, and fiction have appeared in a number of publications, such as the New York Times, The New Yorker, New York Magazine, Harper’s and Granta.

He has received a MacArthur Fellowship, A Guggenheim Fellowship, a Whiting Writers Award, the Dos Passos Prize, a fellowship at the Cullman Center for Scholars and Writers, and was a finalist for the Pulitzer Prize for John Henry Days.

Covid Attendance Protocol at Liberty Hall: Patrons must present a vaccine card with matching ID upon entry. Proof of vaccination can be a physical paper copy or a snapshot on your mobile device, along with a matching photo ID. Fully vaccinated status (2 weeks past final dose of vaccine) is required. For more info please visit their website at libertyhall.net.

Hall Center for the Humanities, The Commons